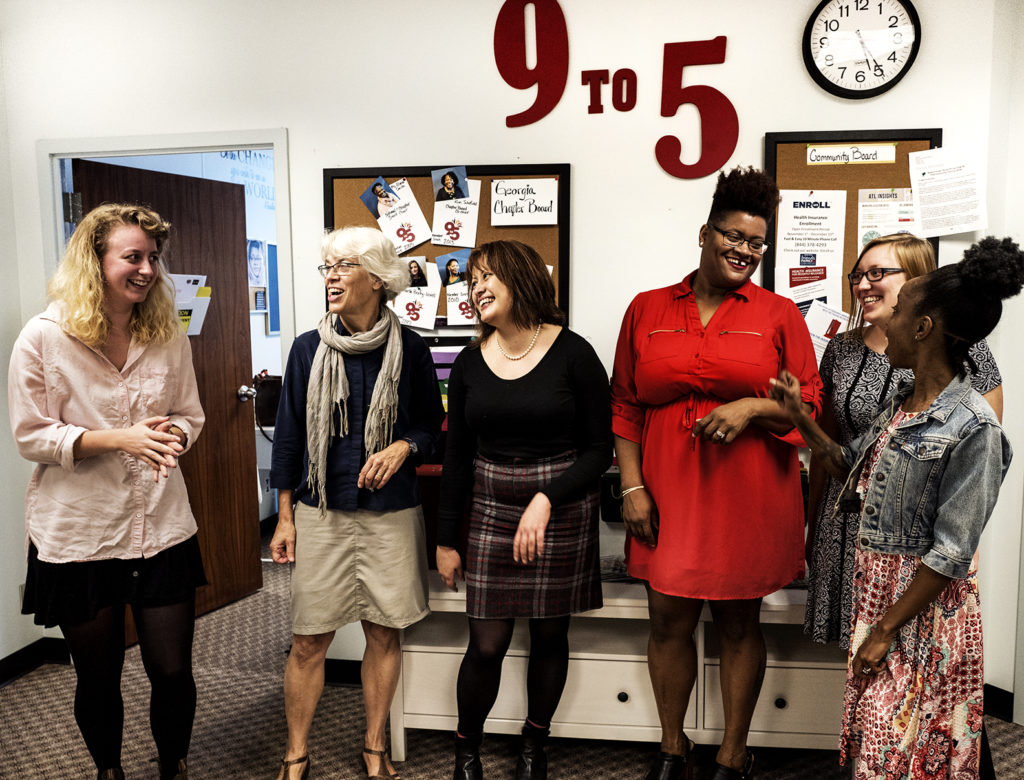 I am Woman #WatchMeVote is a campaign to register 7500 Georgians, conduct 10 city-wide pop-up education shops, and help to increase voter turnout in precincts that have low voter turnout. Imagine how powerful we could be if every woman who was eligible to vote did.

In 2018, families can be big or small, made up of people who share a common bond: Love. We partnered with the Family Justice Network in a project to engage local communities across Georgia in conversations about the need for public and workplace policies that include families of all shapes and sizes.

9to5 was an instrumental part of the coalition group that worked to get the Family Care Act signed into state law. The Family Care Act ensures that anyone who earns sick time at work is able to use that time to care for a family member, in addition to themselves.

When women participate in public life, we change our communities for the better. Our new Power of Participation training traces the history of women making their voices heard in the United States and equips women with the tools to speak out and make change today.

We don't have to choose between roads & bridges or affordable #childcare and #PaidLeave.

Coming together to pass the Freedom to Vote and Voting Rights Advancement Acts, we can ensure all of us - no matter our color, zip code, or income - have an equal say in our democracy.

We're excited to announce our speakers for our Oct. 8 policy forum, led by @DannyKanso:
- @emannieves from @LiberationIn
- @Cort_Sand from @CenterOnBudget
- Monica Prasad from @IPRatNU
Be sure to register for this free virtual event here: https://gbpi.org/2021-fall-policy-forum-reimaging-revenue-changing-georgia-tax-code-racial-equity/ #gapol

Latinx workers are the fastest growing segment of the workforce but are the least likely to have access to paid sick days or paid family leave. This #HispanicHeritageMonth we need #PaidLeaveForAll

Mica Whitfield
State Director
Mica Whitfield is a nonprofit leader and women's advocate with more than a decade of experience in program development and advocacy. She is fiercely passionate about improving the quality of life for women across the State of Georgia. In her previous position, she served as the Director of Programs for Healthy Mothers, Healthy Babies Coalition of Georgia (HMHBGA). There she managed several programs, grants, advocacy initiatives, and policy-level workgroups for the organization. In addition, she serves as the Vice President and Advocacy Chair for Postpartum Support International- Georgia Chapter. In this role, she has coordinated advocacy efforts to enshrine Maternal Mental Health Day in the Georgia Code, and secured 1.05 million in appropriations to establish the State’s first Maternal Mental Health Telepsychiatry Line. Prior to her role at HMHBGA, she worked with AID Atlanta, one of the largest AIDS service organizations in the Southeast as the Women’s Health Program Manager. Mica received her Master’s in Social Work from Clark Atlanta University and a B.S in Social Work from the University of North Carolina, Greensboro. Mica lives in Lawrenceville with her two children, Justice and Joy.
mica@9to5.org
Amna Farooqi
Albany Organizer
Amna is passionate about community, self-determination, and organizing. She is based in Albany, GA. Her background is primarily in Israel/Palestine, having spent time organizing in the American Jewish community and on the ground in Israel/Palestine studying and leading educational trips. She has interned and worked for a variety of progressive and political organizations, including J Street, the Obama White House, West Wing Writers, and the Ossoff for GA-06 congressional campaign. Originally from Maryland, she is a proud graduate of the University of Maryland.
amna@9to5.org
Shanda Neal
Atlanta Organizer
Shanda is a firm believer that someone else’s opinion does not define you or what you can accomplish in life, if you are willing to fight. A graduate of Winston-Salem State University with a degree in Political Science, Shanda was a vanguard for grassroots organizing and politics. Collegiate activism lead to campaign work for city council elections in Winston-Salem, North Carolina. Shanda seeks to leave the world a better place, whether by given a voice to the voiceless, or redeeming social, political, and economic conditions that keep people oppressed.
Shanda@9to5.org
LaToya Brannen
Savannah Organizer
LaToya is passionate about closing the gender pay gap, and believes that women should have access to affordable, quality healthcare regardless of their citizenship and socio-economic status. She enjoys educating people about organ donation, voter registration, suicide prevention, and women’s health concerns. A native of Savannah, LaToya has a BA in Liberal Arts and an MA in Adult Education and Community Leadership from Armstrong State University. LaToya has worked for the State of Georgia for the past eleven years, most recently providing enrollment assistance to parents of uninsured youth.
LaToya@9to5.org
Jewel Howard
Atlanta Organizer
Jewel L. Howard is a writer, activist, poet, 8X Emmy nominated television producer, and co-host of the podcast, “Speak Out World,” an podcast dedicated to artists and activism. Jewel is a graduate of Roosevelt University with a Bachelor of Science in Business Administration. She has been working in civic engagement and voter registration since 2015. She is passionate about using her gifts as an artist in her work as an activist and bringing awareness to social issues. Jewel is currently the Atlanta Organizer for the 9to5 Georgia Chapter.
jewel@9to5.org
Allison Glass
Leadership Development and Training Coordinator
Allison is a newly transplanted Atlantan, but will always be a Memphian at heart. She’s a grassroots organizer at heart, has developed an organizer training program, has facilitated many challenging conversations around race and oppression, and most recently led a statewide coalition on reproductive rights and sexual health in Tennessee. She is excited to now be a part of the 9to5 family supporting the expansion of their training program.
allison@9to5.org