Please join us in congratulating the 9to5 staffers who have moved into new roles in recent months. We will only continue to grow stronger with these amazing women of color leading the way.

Erica Clemmons-Dean is 9to5’s new National Organizing Director! This position was previously held by Cindia Cameron, who continues her work at 9to5 in the role of Senior Advisor.

As National Organizing Director, Erica oversees our organizing efforts in all the chapters as we chart the course for 9to5’s future work. Erica has previously served as the 9to5 Georgia State Director and was a Georgia chapter organizer before that. Her work fighting for economic and social justice began as a political organizer with the United Food & Commercial Workers union. Erica has a deep passion and commitment to build Young People’s involvement in the movement. 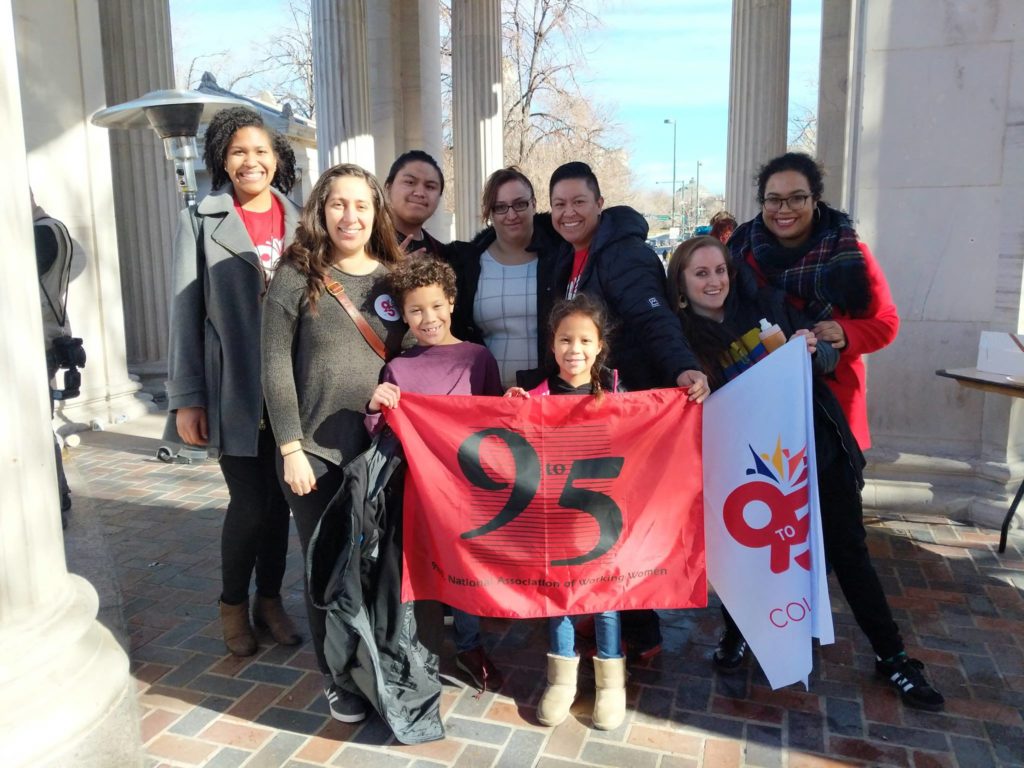 Our Colorado chapter is now being led by co-directors Dre Chiriboga-Flor and Judith Marquez. Previously, Dre and Judith were senior organizers in the chapter.  Judith (second from left) has a strong background in grassroots community organizing for racial and economic justice in Denver, Colorado.  Having grown up as a daughter of Mexican immigrant parents, Judith roots her work in her own family and community’s struggle for justice and liberation.

Dre (second from right) started at 9to5 as a public transit organizer but has taken on housing as her main area of work as the housing crisis has progressed throughout the Denver metro area. Before coming to 9to5 she worked with United Students Against Sweatshops and the Workers Rights Consortium as a volunteer and later worked in childcare, all of which furthered her interest in the intersections of labor, race, and gender.

Amanda Hollowell formerly 9to5 Savannah Organizer, has been promoted to State Director for 9to5 Georgia. Amanda graduated from the University of California at Berkeley where she received her Bachelor’s Degree in Business Communication. She is originally from Palm Springs, California and has made Savannah, Georgia her home for the past ten years.

Amanda is a standing member of the Savannah Black Heritage Festival Committee and Health Fair, Member of the Savannah (GA) Chapter of The Links Incorporated, Board member of Georgia Shift, Graduate of the Georgia WIN List Leadership Academy 2015, Social Media Manager for Women Must Vote a grassroots organization in Savannah, GA, volunteer for Planned Parenthood of Coastal Georgia, and co-organizer for Women’s March Savannah. Formerly, Amanda served on the Board of Association for Multicultural Affairs in Transplantation and the Technology Chair and Girls on the Run of Coastal Georgia. To date, her greatest accomplishment is being the mother of her son, Joah Cash.